In the Cold War, U.S. Presidents were not soft on communism, to put it mildly. At the same time, they were well aware – intensely aware – of the danger of nuclear weapons to the planet and did their best to control them. Not so today. There’s a strange nonchalance about nukes in the White House, the Congress, and the media as if somehow they don’t matter so much. What’s going on?

It may be that, paradoxically, continuing war has made people indifferent to it. The U.S. is now engaged in numerous military conflicts in the Middle East, Africa and who knows where else? They’re seldom reported. We’re neither winning nor losing these wars, which seem to drag on interminably. That’s the way it is, say supporters. We’ve got to live with it, and after all, it’s not so bad.

Complacency may not be justified. Even a little war, destructive in itself, can quickly flame into a big one. A prime example is World War One that hardly anyone expected after a century of relative peace. Two fatal shots in the ever-feuding Balkans triggered a clash of powers that shattered the world with enormous casualties. And that was accomplished without the aid of nuclear weapons. Add them to the mixture and the apocalypse is at hand. 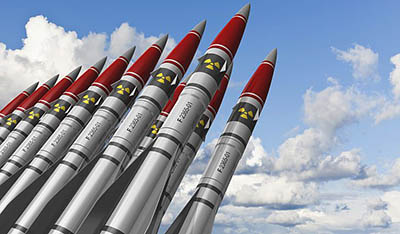 Yet attention is now resolutely focused on what could pass as small-scale problems: Russian interference in the U.S. Presidential election and a dust-up with neighboring Ukraine. These require reaction and remedy, but casual talk of war as a solution is surely tempting fate. Much vilified Russian President Putin is actually somewhat restrained. But what about others in Russia and elsewhere, including the West, who may rise to the bait of war as a cure for the problems that seem to bedevil them?

It may be time to recall the Cold War leaders from Eisenhower to the first Bush who combined strength with strategy to prevent all-out war with the Soviet Union. They made their share of mistakes. They were under constant attack for either being too soft or too hard, but they stuck to their course and in time prevailed. With their departure something was lost in U.S. policy that needs to be recovered. The looming nuclear weapons demand it.