Whatever the degree of outside organizing and financing, the thousands of people trying to reach the United States are fleeing some of the most hellish conditions on earth, a violence equal to war zones that is not fit for life. The drug lords, financed by U.S. consumers, have taken over El Salvador and Honduras, not to mention Mexico, and it is they who pose this challenge to the U.S. border. 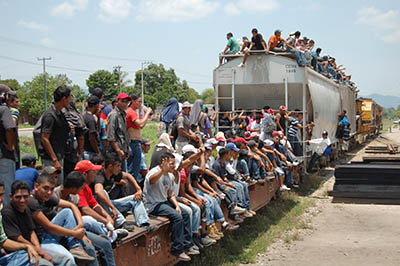 There are risks in traveling north to the United States and no assurance they will cross the border. One means of transportation is La Bestia, a train that runs through Mexico and lets people ride on top where there’s always the danger of robbery, rape or simply falling off. But better that than what they endure at home.

Crime is inescapable. Miriam Carranza told The Guardian that a local gang demanded a “war tax” that exceeded the family income. “They said they would kill one of my daughters if we didn’t pay.” The family joined the caravan. “Honduras,” she says, “just isn’t a country where you can live in peace.” That’s also true of Aida Acevedo, 26, who motioned fingers slicing across her throat, describing the threat if she didn’t pay what a gang demanded. She, too, became part of the exodus.

And all because of drugs. None of these gangs terrorizing the region would exist but for the billions of dollars they earn from American drug consumers. There’s a certain nonchalance in the media and U.S. Government about the damage this drug usage does to people south of the border, as if they somehow lack the will to stop the violence or are even inclined toward it. How can Americans be held accountable for that?

There’s only one solution, says Jacob Hornberger, reflecting a libertarian standpoint: legalize drugs. “Those drug cartels would be gone tomorrow because they cannot compete in a legitimate, legal market,” he writes. “Nobody is going to buy drugs or needles from a drug lord when he can buy them from a reputable pharmacy or company.” Such has been the case with that other dangerous substance, alcohol.

Even if desirable, total legalization is not feasible at present. But partial legalization of marijuana in America has had an impact on the cartels. Marijuana is their chief product, accounting for as much as fifty per cent of their earnings. Now much less of it is being seized in the U.S., a sign that in desperation the cartels are switching to harder drugs like fentanyl and methamphetamine. Usage of these is indeed spiking in the U.S., but they don’t begin to make up for cartel losses in marijuana. So, let’s complete the legalization of marijuana and keep chipping away at their power.

In the meantime, Americans could at least face up to the fact that their drug habit is a major contribution to the ominous caravan approaching their border.

One thought on “Caravan from Hell”