Cleopatra is almost as well known today as she was when alive in the 50’s BC – the glamorous subject of prose and poetry, drama and film. A goddess of love, we are told, who seduced two of the Roman greats – Julius Caesar and Mark Antony – overlooking perhaps her profound influence on them and the politics of the time and to come.

Yet we don’t really know what she looked like – some faded images on coins, but no painting or sculpture. Her beauty could dazzle, said admirers of the time, but that was only part of the picture. It was her whole being that captivated lovers and non-lovers alike. It was her unique “presence,” wrote historian Plutarch. Shakespeare noted in his play “Antony and Cleopatra: “Age cannot wither her nor custom stale her infinite variety.” 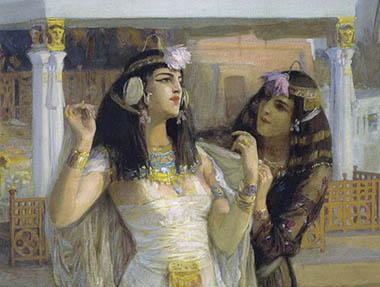 Caesar was first. He had emerged from a brutal civil war as the most powerful man in Rome. Only in 48 BC he wasn’t in Rome but temporarily in Alexandria, the principal city of Egypt, where at twenty-one Cleopatra was the uncertain queen. She had to get to the new conqueror amid the tumult, but how? Bundled in a kind of blanket, she was rowed across the harbor to Caesar’s palace and was unrolled at his feet. The surprise seduction worked, and the pair were inseparable.

Cleopatra was not only a match for him physically but also intellectually. She was a gifted linguist and like him, an accomplished writer, author of books on subjects ranging from cosmetics to philosophy. She joined him on a three-month cruise on the Nile, where embodying the exotic East in contrast to austere Rome, she whispered sweet murmurings of monarchy to his willing ear. Let him reach the pinnacle of power within his grasp and they could be king and queen of the known world.

But nothing was more alarming to the earnest republicans of Rome. Their republic was founded on the overthrow of a king, a rule never to be repeated. Caesar further offended by erecting a gold statue to Cleopatra appropriately in a temple of the goddess Venus. There were rumors that the capitol might be transferred to Alexandria. That was enough. Sixty senators conspired to assassinate him, thus presumably putting an end to dreams of empire.

But not so. Caesar’s followers launched another civil war, and Caesar’s close ally, Antony, summoned Cleopatra to him in Greece. Her approach this time was not surprise but spectacle, as Plutarch writes: “She came sailing in a barge with gilded stern and outspread sails of purple, while oars of silver beat time to the music of flutes and fifes and harps. She herself lay all along under a canopy of cloth of gold, dressed as Venus. Her maids were dressed like sea nymphs and graces. The perfumes diffused themselves from the vessel to the shore, which was covered with multitudes following the galley up the river on either bank.”

There began a romance of wine and ribaldry, but it soon became apparent that Antony was not to rule Rome. He was challenged by Octavius, Caesar’s adopted son. Antony, a skilled commander, wanted to fight on land, but Cleopatra insisted on going to sea, where in the middle of the battle she suddenly deserted with all her fleet. Forlorn Antony followed, giving the victory to Octavius, who as Augustus became the first emperor of Rome.

Cleopatra got her wish. Her retreat allowed the creation of an empire. With her customary wiles, was she secretly working for Octavius, who desperately tried to have her join him in his triumph after Antony’s suicide? She preferred death by poisonous asp. She would not become queen of Rome but a lasting queen of legend.