There’s still a tendency to treat Mexico as just another country with established institutions in routine communication with their counterparts in the U.S. In fact, Mexico has been overtaken – some would say mastered – by the extraordinarily violent drug cartels that have randomly killed some 200,000 Mexicans in the last ten years with no sign of slowing down. They supply the United States with almost all its illicit drugs and opiates, leading to drug wars in major American cities with a steep rise in crime. The cartel chiefs have even honored this country with their presence in upscale communities from where they can direct their extensive traffic.

What can enlist American interest in this tragedy across the border that is surely as worthy of attention as distant Syria and Somalia? In the November 20 New York Times, Azam Ahmed writes from the perspective of the victims in Mexico, a gripping, poignant account of two grief-stricken parents – two of many thousands – in search of the remains of their children who have disappeared without a trace. They know that being “disappeared” by the drug cartels means invariably death after torture, but at least finding the bodies brings a kind of closure.

Carlos Saldana and Vicky Delgadillo got together after they lost daughters less than a day apart to apparently the same criminal gang. They assumed the two girls would be buried in the same place. To that end, they tried to spot any upturned earth on a ranch frequented by the gang. On seeing it, they would hammer a metal stake with a hook into the ground to pry loose any remaining articles of clothing or body. Forensic specialists brought along to help recovered blouses, jeans, shoes and baby outfits belonging to other children who had disappeared. The two parents continue their search.

The state of Veracruz, where they live, has now run out of money for DNA tests to link the remains of bodies to existing families. So Carlos and Vicky and others must raise money on their own. The state is also short of graves for all the missing. “The entire state is a mass grave,” says attorney General Jorge Winckler.

To this has Mexico come, the result of Americans’ voracious appetite for drugs that keeps the cartels in business and families in search of their loved ones. 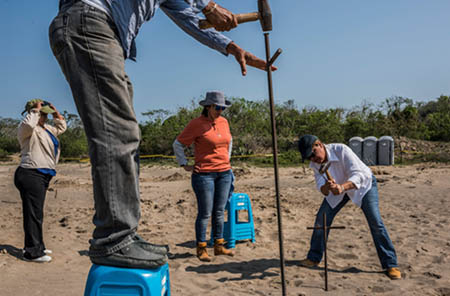 Members from the Colectivo Solecito, a group of women whose children are missing, found more than 250 skulls at this site near Veracruz.
Photo by Daniel Berehulak for The New York Times