New England poet Robert Frost has been much quoted recently due to a topical poem, “Mending Wall,” though not on the Mexican border:

“Before I built a wall I’d ask to know
What I was walling in or walling out,
And to whom I was like to give offense.
Something there is that doesn’t love a wall,
That wants it down.”

The poem goes on to say that the builder of the wall is like an “old stone savage” who moves in darkness with little reason. 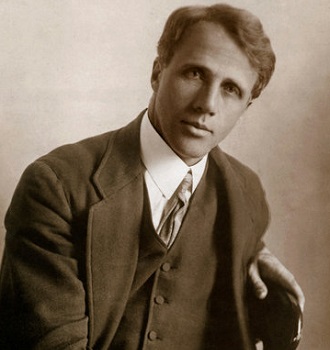 But if Frost serves a certain political view in this poem, his work in general deals with the issues of the ages, though based on the most down-to-earth subjects. His first poem “My Butterfly” was a preview of those to come. A onetime farmer, little in nature escaped him and found its way into his poetry – storms and spiders, cows and stars. All get equal, indeed loving treatment.

But they often lead to poignant, perplexed thought, as in “Desert Places”, where he observes the stars on a lonely snowy night:

“They cannot scare me with their empty spaces
Between stars – on stars where no human race is.
I have it in me so much nearer home
To scare myself with my own desert places.”

Nature can be fierce, as in “Once by the Pacific”:
“The shattered water made a misty din,
Great waves looked over others coming in,
And thought of doing something to the shore
That water never did to land before …
It looked as if a night of dark intent
Was coming, and not only a night, an age,
Someone had better be prepared for rage.
There would be more than ocean-water broken
Before God’s Last Put out the Light was spoken.”

As the country’s most celebrated poet, Frost recited “The Gift Outright,” a foray into patriotism, at President John F. Kennedy’s Inauguration in 1961:

“The land was ours before were the land’s.
She was our land more than a hundred years
Before we were her people…
Such as we were we gave ourselves outright
To the land vaguely realizing westward,
But still unstoried, artless, unenhanced
Such as she was, such as she would become.”

In much of his verse, Frost questions the meaning of life and poses many eloquent answers that are not ultimately satisfying. He remains undecided between Fire and Ice:

“Some say the world will end in fire,
Some say in ice.
From what I’ve tasted of desire
I hold with those who favor fire.
But if it had to perish twice,
I think I know enough of hate,
To say that for destruction ice
Is also great
And would suffice.”