Glenn Greenwald usually writes about the encroachments of the deep state on American freedom. But he’s also concerned about freedom from pain and desertion for dogs. He and his partner David Miranda rescue strays from the streets of Rio de Janeiro, where they live. They have a couple of dozen of their own and put many others up for adoption, mainly in the U.S.

On one occasion, Greenwald came across a badly limping dog but figured he had one too many at home. On thinking it over, he changed his mind and returned to the dog that had barely moved. He picked her up and placed her in the menagerie only to learn from a vet that he was about to become a grandpa. “Mabel”, as he named her, gave birth to six pups, four of which he took to the U.S. on a speaking tour. They were adopted by owners of appropriate temperament, and all was well for man and dog. 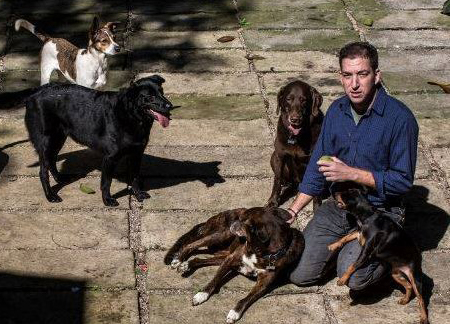 Greenwald has also acquired some human strays; that is, homeless people who have bonded with dogs on the street. Some now live in a shelter he created where both man and animal adjust to a new and more hopeful life. If only that were true of dogs now mangled in scientific experiments that seem hardly worth the pain. They are currently beyond Greenwald’s reach, but who knows?

Greenwald is also concerned with humans’ imperiled freedom. Notable is the mass surveillance of Americans by U.S. intelligence agencies and then pursuing many of them without constitutionally required warrants. Privacy is a thing of the past but to what purpose? Contrary to the claims of intelligence chiefs, there’s no indication that all-consuming spying has resulted in stopping terrorist attacks, much less the frequent non-terrorist mass shootings.

Secretly collected information can also be misused. There’s considerable evidence intelligence was politicized in the last Presidential election. Writes Greenwald in his book “No Place To Hide”: “The secrecy creates a one-way mirror; the U.S. Government sees what everyone else in the world does, including its own population, while no one sees its own actions. It is the ultimate imbalance … leading to limitless power with no transparency or accountability.”

Greenwald notes that a citizen who knows he can be watched any time is intimidated even when he’s not being watched. This is hardly the stuff of democracy, more akin to the non-democratic regimes that have plagued the planet. Let dogs and humans find freedom together.