Paul Biya has been President of Cameroon for 42 years. Ali Khamenei has been Supreme Leader of Iran for 36 years. Denis Sassou Nguesso has ruled the Republic of the Congo for 33 years.

That makes Emomali Rahmon something of a youngster. He has been in charge of post-Communist Tajikistan for a mere 27 years, though he has made up for lack of time on the job with exceptional dedication to it. No one doubts who is in charge of Tajikistan — the smallest, poorest and most mountainous of the five republics of Central Asia, once part of the Soviet Union, now on their own.

Rahmon has recently come to the attention of the U.S., not for something he has done but for the way he has been portrayed on Radio Free Europe-Radio Liberty. The U.S. Government broadcasts are intended to promote democratic values abroad. They are instead accused of promoting Rahmon. As an example, RFE-RL noted the craze among Tajik youth for having a hair style like that of Rahmon’s son, who is now mayor of the capital Dushanbe. A student is quoted as saying the mayor is such “a model of a young and successful leader that they are trying to imitate him in everything.”

After 27 years, this should not have come as a surprise. Like the other leaders of Central Asia, Rahmon has ruled with an iron hand, continuing the practice if not the theory of the Communism that was abandoned. It’s still a long way from democracy in Central Asia despite the best efforts of U.S. broadcasts. The U.S., in fact, is willing to overlook such lapses because of other values of the region such as forming a barrier to the Taliban in Afghanistan and maintaining a stability that won’t be upset by outsiders continuing to play the Great Game for power and influence. China is now playing harder than others, recently establishing a military base in Tajikistan to offset the Russian one.

As it happens, I was in Tajikistan in 1992, the year Rahmon took power. Reporting for the Voice of America, I noted: “Tajikistan – at the end of the world or its center? Here is a small, isolated, mountainous nation of a little over five million population that was exploited or ignored under long years of Soviet rule. But with the Soviet collapse, it’s now swept by all the crosscurrents of dissolving empire: communism and democracy, reform and reaction, Islam and atheism, nationalism and regionalism, along with interested – not to say – intrusive – neighbors like Iran and Afghanistan. It’s a heady, exhilarating, confusing mix.” 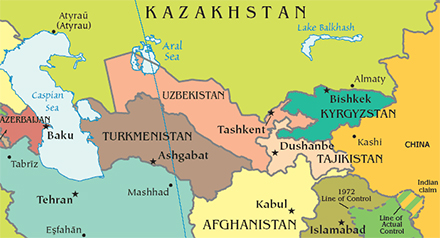 I interviewed both sides in the civil war, won by Rahmon and the hard-liners, and also talked to the victims of it: “The line of refugees stretches south as far as the eye can see, and they keep coming. The luckier ones have piled into trucks or buses with their belongings. Many trudge along the side of the road, pushing wheelbarrows full of bundles.”

Wartime Tajikistan shared other similarities with contemporary Mexico. For a few years it became the most dangerous country in the world for journalists who kept being killed until there weren’t any left. There was not much we could do about Tajikistan half a globe away. But Mexico, as we know, is next door. There is not just a border problem. Fundamentally, there’s a Mexico problem, a country ravaged by the drug trade financed by Americans who can’t seem to get enough.