Among all the dreams of the future is Paolo Soleri’s Arcosanti, a stark, massive, multilevel concrete structure some 70 miles north of Phoenix, Arizona. It stands alone amid a serene setting of low lying mountains and desert.

And lonely it is. It was intended to be a thriving city of some 5,000 people compressed in a unit where all their wants would be met, and the surrounding 860 acres would be spared – no private homes or cars, an untrammeled countryside. Nature would be respected and no longer overrun. Instead of building out, city dwellers would build up, an expansion towards the heavens and a definitely new way of life.

But the past has not been expelled at Arcosanti. It lingers on in a very rough road leading to the structure and the first sight on arrival is a vast collection of rubble. The architecture is novel and intriguing but abstract and bare, lacking the usual amenities of a home. It’s as if austerity is the aim. Numerous stairs must be climbed to reach different levels, and concrete is hard to sit on for any length of time. Vision must substitute for comfort. 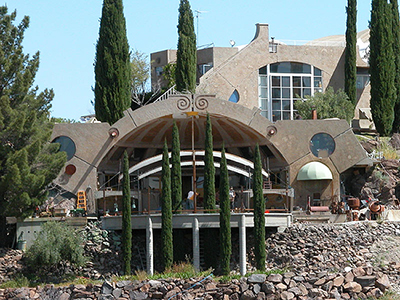 Only some 50 people are in residence, though they say they are proud and happy to be part of this experiment. Their main source of income are bells they create and sell. Soleri instructed them: “I have given you the instrument. You will make the music.” And indeed the bells are ringing.

The future still awaits. Not everyone is sold. Soleri’s two daughters are not involved with Arcosanti and lead their own private lives. A young woman in residence told me only some kind of catastrophe would make a concept like Arcosanti feasible. That’s not, of course, what Soleri, who died in 2013 at 93, had in mind. But visions, we know, are necessary, even if they are unfulfilled.

One thought on “Future in Arizona”