As Mexican cartels continue to drive more drugs and people across the U.S. border, there’s talk of using American troops to combat them.

The U.S. surely doesn’t need another war, but some degree of force may be necessary to contain the drug cartels that are becoming more of a menace on the border with violence uncomfortably close and sometimes slipping over. President Trump is sending some 5,000 additional U.S. troops to the seven thousand already there, but they cannot go into action and must act with restraint whatever the provocations, which are increasing.

Cartels brazenly escort immigrants to the border and demand they be let in. More quietly, they smuggle drugs across, usually under cover of darkness. They recently drew guns on Border Patrol agents trying to apprehend some immigrants. President Trump responded that this was a “diversionary tactic” to conceal a nearby drug delivery and warned it better not happen again. A few years ago, he told a gathering of Hollywood conservatives that we should have invaded Mexico rather than Iraq.

Mexican border towns I used to visit were quiet and peaceful, similar to those on the other side of the border in Arizona. They share what’s described as a “border culture,” an amalgam of Anglos and Hispanics with much the same way of life and outlook. In June, the Mexican side suddenly erupted in the kind of violence that is ravaging the rest of the country. Shootouts spreading from Agua Prieta to Naco killed ten people, the mark of the cartels.

There’s also the problem of terrorism. Judicial Watch reports that four members of ISIS – two Egyptians, two Iraqis – heading for the U.S. were captured in Nicaragua. They had legally entered Central America, making it harder to detect them. An ISIS Training camp has also been located appropriately near the border town Juarez, once known as the “murder capital of the world.” The U.S., says Judicial Watch, has been hard put to stop terrorist infiltrators.  Brandon Judd, president of the National Border Patrol Council, told Fox News: “We have hundreds upon hundreds of incursions by the Mexican military into the U.S., yet we have few incursions by Border Patrol agents into Mexico.” 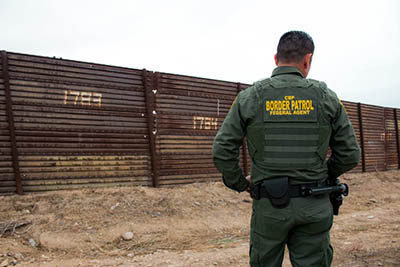 To give the U.S. more freedom to reply would require veiling distant, unhappy memories. After launching a war with Mexico in 1846, the victorious U.S. annexed close to half of Mexico that became the American Southwest. U.S. Congressman and future President Abraham Lincoln first made his name condemning the war as unjust. A current cartel chief says it’s his mission to get the land back. Drugs are a means to that end.

Still, changing times need new answers. One option is making an arrangement with Mexico to allow U.S. forces on some occasions to cross the border in pursuit of particularly aggressive cartels. Another is somehow to stop Americans from buying the drugs that finance the cartels’ murderous business.