The U.S. Senate has given the country the best possible Christmas present – a bipartisan 56-41 vote to withdraw the U.S. from the calamitous war in Yemen that has led to some 60 thousand deaths and looming starvation and fatal disease for thousands more. The House of Representatives must still approve the bill with chances higher after the Democrats take control in January.

“We have brought Republicans and Democrats together in a very historic moment to take back the Congress’ constitutional responsibility in matters of war,” says Democratic Senator Bernie Sanders, who calls the Yemen conflict “the worst humanitarian crisis on earth.”

But President Trump says the bill violates his constitutional authority as Commander in Chief and argues we must support our ally Saudi Arabia against the rebel Houthis. Also, Iran, a current fear of the administration, could be behind the Houthis to which Republican Senator Rand Paul replies: “That’s a far-fetched argument. Iran is largely checkmated by Israel and Saudi Arabia.” The U.S. isn’t needed.

By any measurement the U.S. is at war in Yemen, a smaller neighbor of far stronger Saudi Arabia. The U.S. supplies weapons and intelligence to the Saudis as they have tried to suppress the Houthis in fighting since 2011. It’s estimated that a third of Saudi bombings have targeted civilians, including a school bus last August that killed 54 people, among them 44 children between the ages of 6 to 11. It was later learned that the bomb in the airstrike had been manufactured in the U.S.

The toll this violence has taken is incalculable. Ali Al-Makhaathi, who provides food deliveries in Yemen, told The Guardian: “The sound of the jets has become strangely routine. Adults barely react to their haunting humming sound now, but it terrifies our children who run from their beds petrified. They can’t remember a life without fear.”

The military support of the Saudis was begun under President Obama and continued by President Trump, though he pledged in his campaign to end this kind of involvement. A precipitating factor in the success of the new bill was the assassination of journalist Jamal Khashoggi by the Saudis in Istanbul. It’s striking that it took the death of one well known individual to draw attention to the slaughter of many thousands of others lesser known.

Though not as horrific as Yemen, the U.S. is engaged in a number of other questionable wars or semi-wars in various parts of the world. Perhaps next year’s Christmas present from Congress could be extricating the U.S. from some of these. It could get to be a habit. 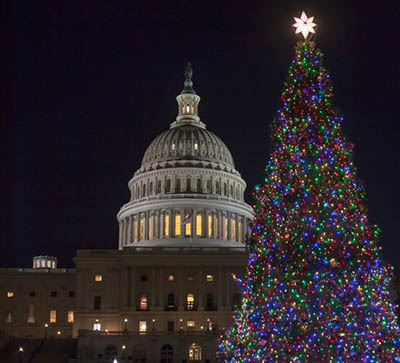