Visitors to the Metropolitan Museum of Art in New York City must look up, way up to see the lofty exhibit from the cathedral in Puebla, Mexico. Three stories high is a spectacular painting of the Old and New Testaments – “Moses and the Brazen Serpent and the Transfiguration of Jesus”- completed by Mexican artist Cristobal de Villalpondo in 1683. It took him five years, working mostly from a scaffold, to add his contribution to the Roman Catholic Counter-Reformation intent on reassuring the faithful with art and architecture of enduring beauty.

In the lower half of the painting, Moses guides bewildered Israelites out of the snakes enveloping them for doubting the word of God. Above, the Son of God emerges into the light of heaven “It’s a churning collision of saints and mortals that should encourage all sorts of veneration,” writes Jason Farago in the New York Times. He notes the signature at the bottom of the painting: “Villalpondo Inventor,” indicating the artist was not a mere European imitator of colonial Spain. “He was an inventor of his own, and his gaze extended as far as paradise.” 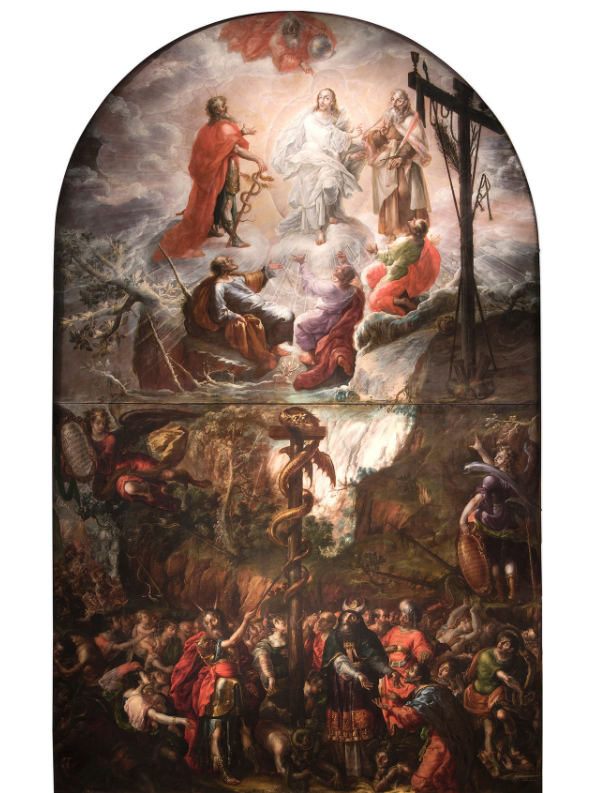