In the parched desert south of Tucson is an unexpected, startling sight – a gleaming white church with two sturdy towers that is considered the finest example of Spanish colonial architecture in the United States. It’s the Roman Catholic San Xavier del Bac Mission. 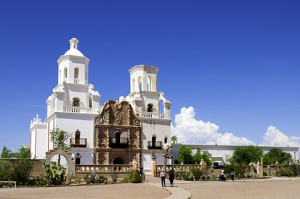 But what’s it doing there? You can credit a deeply committed, tireless Jesuit missionary, Father Eusebio Francisco Kino, who established the site in 1692 as one in a series of missions across New Spain to bring Christianity to the Indian inhabitants. He had plans for a church, but didn’t live to see it. In fact, it was not until 1797 that the church was largely completed and dedicated.

The passage of time has taken its toll. The church has endured neglect, vandalism, warfare, storms and earthquake. It often seemed on the verge of collapse, but somehow held up. Parishioners are forever making repairs –  removing grime from walls and statues, reinforcing structure with locally produced cactus juice mortar. Even so, the church is not altogether finished, though that can await the centuries of faith ahead.

What is there today is wondrous enough – interior walls depicting in every conceivable color supreme occasions like the Last Supper, multiple statues of frolicking angels alongside steadfast saints. There’s no escaping the Christian vision in this church, as no doubt intended. Writes Kathleen Walker in her illustrated book “San Xavier:” “The interior is a classroom of Catholicism where the history and the tenets of the religion could be taught to the new converts and the yet-to-be-converted.”

And there’s more. The top sculpture on the outside facade features a cat and mouse glaring at each other. In his book of Arizona folklore, “A Border Runs Through it,” Jim Griffith notes the many legends surrounding the church, but is particularly taken with the explanation that when the cat finally catches the mouse, “it will be the end of the world.” So far they thankfully remain apart.

Tourists are abundant at the church, but the main worshipers are the local Tohono O’odham, the nation’s third largest Indian tribe on whose reservation the mission stands. They welcomed Christianity with some adjustment to their own traditions. At times when the church was deserted and in decay, they gathered at its walls to offer their prayers and protection. In many respects, San Xavier is Tohono O’odham.

Note:  For more information and images of this beautiful church, visit their website: SanXavierMission.org