In early October, five police investigators were eating dinner at a local restaurant in the Mexican border town Juarez when a gang burst in, shooting. Their aim was off. The police were wounded but survived. Yet all was not as it seemed. A week before, the assailants had set up banners in Juarez accusing the police of working for a rival drug cartel. In fact, in September, four police had been ambushed and killed in nearby mountains for apparently the same reason. In Mexico these days, you never know. Cartels reign supreme. The law is lawless.

Close to five years ago, I visited Juarez when it was called, reasonably enough, the “murder capital of the world.” Crossing the border from El Paso in Texas to Juarez, the contrast was startling. On the U.S. side, a largely Hispanic population shopped and chatted cheerfully right up to the border. Then a few yards away in Mexico, utter desolation. Deserted, crumbling buildings with no sign of life, not even a sullen rodent, as far as the eye could see. Was Juarez beyond repair?

No for its concerned citizens determined on change. They set to work and improvement came for a while. But overshadowing all is the enormous drug trade. As long as Americans avidly consume the drugs provided by the Mexican cartels, there is little Juarez or any other locality can do. They are at the mercy of the drugs. So the abyss beckoned again. Thanks to a degree of legalization of marijuana in the United States, the cartels are now turning to more lethal methamphetamines that are currently an American craving. As they war over routes and sources, they manage to kill many bystanders as well and, frankly, get to enjoy it. Killing becomes an end in itself. 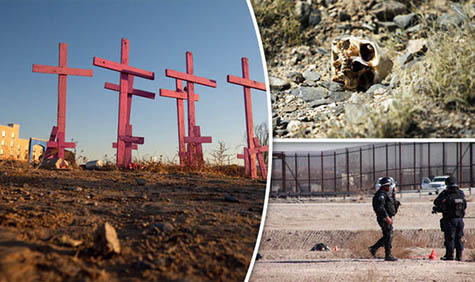 As a result, there were 15,973 homicides in Mexico in the first half of 2018, the highest since records have been kept. Juarez is not lagging with 970 murders so far this year. Yet as usual, there’s virtually no coverage in the American media which is more concerned with such distant places as Syria and Somalia. What coverage there is fixates on immigration, not the drug related violence that leads Mexicans to try to escape to the U.S. And there’s hardly any mention of the annual 65 billion dollars in cartel profits and where it goes – back to Mexico, to be sure, and also around the U.S. to groups and people high and low. Drug corruption is rife and unreported.

But if ignored by the America media, the cartels have learned to use it to their own advantage, at least the social media with photos and videos of beheadings and victims stuffed into cars. The bosses flaunt their gold-plated weapons in provocative poses, though they occasionally show a charitable side like transporting supplies to victims of a hurricane. They are nothing if not inventive, and thanks to drugs there’s always plenty of money.