No trouble knowing who is honored at the Washington Monument and Lincoln Memorial. But what about Osceola Street in Stuart, Florida? I asked some passersby if they could identify the man whose name is attached to a main avenue in the town. One after another couldn’t until a woman suggested, “Maybe an Indian.”

Correct. A native American, and a notable one at that. Not quite as famous as other chiefs out West with the anglicized names Sitting Bull and Crazy Horse, Osceola nevertheless was a skilled strategist who kept the white settlers at bay with adroit maneuver in forest and swamp over a period of years in early 19th century America. The issue was never in doubt considering the odds in troops and resources against him. There was no stopping the settlers, but he exacted a high price.

He was a member of the Seminoles, a collection of various tribes who wanted to remain in Florida despite the pressures to remove them. A chief noted that while the settlers clustered in small towns, “the Seminole swims the streams and leaps over the logs of the forest in pursuit of game. He is like the whooping crane that makes its nest at night far from the spot where it dashed dew from the grass and flowers in the morning.”

Collision between these walks of life was inevitable. Osceola, whose name means a strong ceremonial black drink, was prepared to fight to stay on his land. A U.S. officer said of him: “Never have I seen a more striking figure, his sturdy stride, the significant shift of his head and uplifted hand, clutching and flourishing with some ferocity his knife.”

When General Andrew Jackson, then governor of the Florida territory, ordered the Seminoles to move west, Osceola refused and brought the tribes together to resist. Adding to the turmoil were black slaves held by the Indians who accused the settlers of wanting to capture them. Osceola brooked no opposition. When a chief balked at fighting, Osceola stabbed him. Other tribesmen feared to go near his remains, which were finally collected and buried by U.S. officers.

Osceola was understandably skeptical of any treaties signed with the settlers and plunged his knife into one proposed document, leaving a celebrated hole in the desk. But he, too, was eventually betrayed by an offer of peace talks. Under a white flag of truce, he was seized in 1837 and imprisoned. Settlers were relieved but disliked the treachery involved. In declining health, Osceola spent his last days at Fort Moultrie in South Carolina. He had a farewell visit from his friend, the famed artist George Catlin, who had painted him in all his Seminole finery – a renowned portrait of a native American leader at his prime in defense of his land. 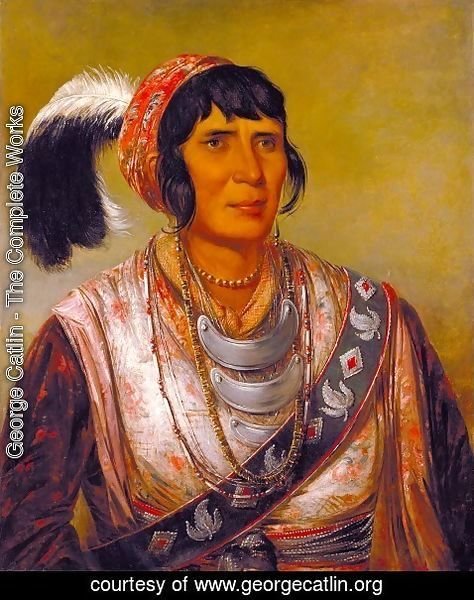 One thought on “Osceola of Florida”