Senator Rand Paul has been spending quite a bit of time at the White House these days. He’s working with President Trump on a variety of issues, but he also may remind the chief executive of his campaign pledge to reduce the number of current U.S. wars, a main concern of the libertarian senator. If he is convincing enough, say some observers, he might even find his way on to the Republican ticket as Vice President. 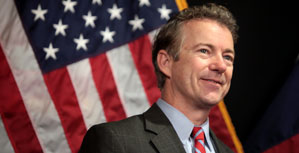 The senator wasted no time attacking Saudi Arabia for its brutal torture and execution of a dissident journalist in its consulate in Istanbul, Turkey. He notes it’s only the latest of over 3,000 alleged Saudi torture episodes from 2009 to 2015 for which no one has been held responsible. For the kingdom, it’s apparently a way of life – or death. Says Paul: “I have been attempting to expose this for many years.”

But journalist Jamal Khashoggi is only one man. The Saudis have been slaughtering tens of thousands of men, women and children in neighboring Yemen with arms and intelligence supplied by the United States, which is intervening in a local war that seems hardly in the American interest. President Trump explains that we have important arms sales to Saudi Arabia and also need it as a buffer against Iran. But in fact, says Paul, it’s not Iran but Saudi Arabia that is spreading a radical version of Islam – Wahhabism – around the Middle East from which terrorism follows.

Paul has little patience with the anti-Russian clamor. Whatever Moscow did or didn’t do in the 2016 U.S. election, he says the two nuclear powers must somehow get along. Last summer, he met with various Russian officials in Moscow and invited some of them to come to Washington. He also delivered a private letter from President Trump to President Putin. “Engagement,” he says, “is vital to our national security and peace around the world.” In case Trump’s seemingly casual remark about meeting Iranian President Hassan Rouhani is serious, he can count on Paul’s support.

Despite his off-center views, Paul is gaining some traction in the U.S. Senate, which is beginning to express doubts about all the far-flung U.S. commitments. Writes Curt Mills in The National Interest: “While other Senators may disagree with him, his willingness to go against the flow, at a moment when there is not a huge amount of debate on foreign policy issues, does command the respect of a number of his colleagues and has allowed him to enjoy the spotlight.”