Like Thai food? If so, stop by Basil Garden in Palm City, Florida, where a Guatemalan chef and his Thai associate will serve you fare worthy of that Southeast Asian country.  They came to America from far distant parts of the globe, met, married, persevered and now own two restaurants in what can only be called an immigration success story.

For Kritsanee Pulsiri it was not a drastic change from Thailand to the United States. She had been traveling quite a bit for a Japanese company that designs various kinds of motors. She was familiar with China and Japan, but she hadn’t been to the United States, land she was told of opportunity. Getting a little bored with her current job, she decided to give it a try. 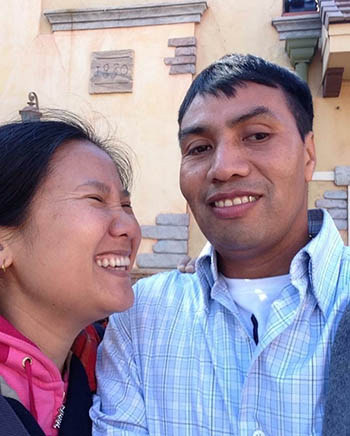 What to do? Since her mother sold food in Thailand, a restaurant seemed suitable. After arriving in California in 2006, she moved east to Basil’s in seaside Stuart, Florida. She was an instant success and was dubbed “Lucky,” a name that stuck for reasons that became apparent. There she met a cook already at work, Santiago Reyes.

Not so lucky as Lucky, he grew up in a poor family in a mountain town four hours from Guatemala City in Central America. He had only one year of school because his parents couldn’t afford to pay for books. At six he went to work restoring tires and a few years later a pellet from a spinning machine struck his left eye. He was hospitalized for a month and eventually lost sight in that eye.

Though he returned to work on tires, at 14 he was ready for a change. An uncle arranged for him to go to the U.S., which meant paying a cartel boss $1,000 to cross the border. After spending three days under a bridge in Houston, Texas, he got an apartment and a job as a dishwasher at a local restaurant. As he rose in the kitchen ranks, he discovered his vocation.

Moving to Stuart, Florida, he started Thai cooking in Basil’s and was soon joined by Lucky. They married in 2011 and later bought both Basil restaurants in Stuart and neighboring Palm City. If Thai cuisine brought them together, it also divided them since Lucky prefers highly spicy dishes, while Santiago compromises with more subdued American taste.

He sends money to family and friends in Guatemala and occasionally returns, though the cartel cost of crossing back to the U.S. has gone up to $2,000. “The cartels are everywhere,” he says, making visits hazardous for anyone with money to be extracted. But as U.S. citizens in America, he and Lucky are free of the cartels and able to make their way in the nation of immigrants.

One thought on “Thai Time”