It’s the most dangerous ride in Mexico but never lacks for riders. Central Americans, fleeing the violence of their region, cross the Mexican border and hop the freight train heading north toward the United States. It’s called The Beast (La Bestia) for good reason. It devours its passengers. 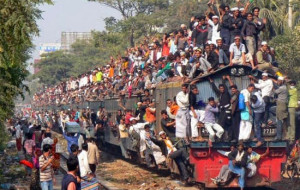 Huddled on the roof with little to cling to, riders can easily fall off if there’s a sudden lurch or if they are careless or fall asleep. Drawn into the fast spinning steel wheels below, arms, legs, heads are sliced off. The remaining body is left on the desolate countryside where medical help for those who survive is rarely available.

This is a history soaked in blood, says Oscar Martinez, who has taken the ride several times. He writes in his book The Beast: “More superstitious migrants say The Beast is the devil’s invention. The train’s squeaks and creaks are the cries of those who lost their lives under its wheel. Steel against steel.”

Why then risk it?  It’s free and avoids the immigration checkpoints. Riders may have to board as many as 25 trains as they wind their way along 1,450 miles to the U.S. border. But it’s the only viable way of getting there, a destination desperately sought, though entrance, of course, is not assured. Riders hire the services of a so-called coyote to find a gap where they can cross, but the Border Patrol may catch them.

Author Martinez meets Mauricio, a 42-year-old Guatemalan who is on his tenth try to get back to his job as a cement mason in Houston, Texas, after being deported three years ago. With a scream like a war cry, he orders a  gangster troubling passengers to get off the train. That is another danger travelers face – predators often working for drug cartels who rob, rape and kidnap them for ransom. As if The Beast alone is not enough.

The land of opportunity free of violence makes the ride worth it.

One thought on “The Beast”