I went to the ophthalmologist Dr. Paul Pare in downtown Stuart, Florida, with a scratched cornea. He prescribed for it, but then his staff wondered if there was something else wrong with me besides my eye – some awkward footsteps, confused speech. Let’s go to the Martin Health hospital across the street for a look, they advised. That we did. A CT scan was taken and impressed the veteran neurosurgeon, Dr. John Afshar, who said we operate tonight. Too much blood on the brain.

As I sank into a pre-operative sleep, the doctor and a nurse phoned my son Stephen and daughter Melanie to tell them that surgery of this kind is uncertain, especially considering my age at 86. Complications are possible.

There followed an operation called a craniotomy, which resembles carpentry. The doctor drilled holes in my skull, then cut between them with a small saw, allowing a piece of the skull to be removed and temporarily placed in a freezer. With the brain exposed, he was able to stop the bleeding and repair the damage, an intricate process for a seasoned surgeon. At the conclusion the skull flap was returned and stapled to the head.

I awoke in intensive care where I spent three days, part of the time struggling with the staff that wanted to keep me in bed for fear of my falling, while I was eager to get up and about as soon as I could. In fact, I was able to walk several hours after the operation. A nurse, Susan Powers, introduced me to the bright new world of recovery.

Then six days in rehab, where my brain surgery seemed almost incidental. Around me were patients with considerable pain (oddly, it seemed, I didn’t have any) and disabilities from the brutal ailments that can afflict human beings. While I walked, most of them shuffled, coaxed along by patient therapists. If frustrated or irritated, they did not seem at all downcast, hopeful that a recovery was coming.

I can’t say that an injury to the brain leaves no residue, but a month after the operation Dr. Afshar assured me all was well. I was free to return to living normally, no pills, no restrictions. He would see me with another CT scan in three months. “You are one of the lucky ones,” he said. I replied in a massive understatement: “I think you had something to do with this.”

The doctor performs ten to twelve operations a week, leaving room for emergencies like mine. Considering the amount of blood on my brain, in another day or two I might have been paralyzed. He says the joy of neurosurgery is seeing the results –  a patient who can walk again and is otherwise restored to normal life without significant pain. “God works his wonders through me.”

Like so many others. I profited from the remarkable advances in American medicine. Craniotomy is a procedure almost as old as man, first performed to exorcise malignant spirits that have invaded the body. Today, more usefully, it preserves the body with scans, computers and all the modern techniques available. Then there’s the near-miracle drug Keytruda, which saved my brother Lyman’s life by removing his metastatic melanoma cancers and might also have rescued my wife Letty from the same disease if the drug had been approved by the FDA a little earlier. It’s now being applied to other forms of cancer.

As we live longer thanks to medicine, the problems don’t seem to get any better. Death-dealing drugs pouring across the Mexican border. Useless wars fought for no particular reason. Our all-seeing spy state extending its reach. But as the years go by, we can confront or ignore these as we choose. Overriding everything is the gift of more life. 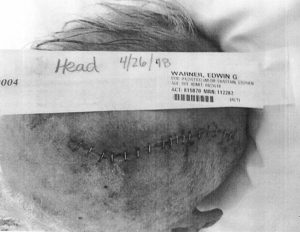 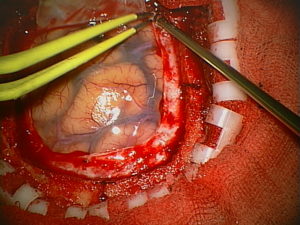 5 thoughts on “The Brain Besieged”