While the nation’s capital seems bogged down in rancor, inaction, spying and war making, the rest of America presents a different picture. There democracy apparently thrives, local communities are on the rebound thanks to bipartisan practicality, and there’s an enlargement of hope in contrast to the bleak national outlook. Such are the findings of a book “Our Towns,” by James and Deborah Fallows (pictured below), who spent four years hopping from one locale to the next in a small, two-seat airplane undeterred by terrain or weather. 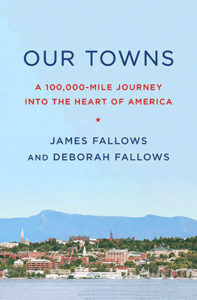 They didn’t fly over “fly-over” country but landed there and found to their surprise that a partiality for Donald Trump didn’t influence local decisions. Their town came first. So there’s no trouble working with political opponents. Just get the job done. Dodge City, Kansas, of wild west fame, is anti-tax on the state and national level, but approved an increase in the sales tax that has funded such projects as a civic center, an expo site, an aquatics park and baseball and soccer complexes. “We may be conservative,” says project coordinator Melissa McCoy, “but we’re progressive.”

That means people working together, whatever their opinions. Americans have a gift for association, wrote Alexis de Tocqueville in his much admired “Democracy in America.” Give them a pretext and they start organizing. Just as true today, say the Fallows. An example is Bend, Oregon, where a neglected library achieved new life by combining with 60 other community groups to the benefit of all. Libraries in general now offer, along with books, art exhibits, computer classes, story hours, even equipment to be borrowed. In Vermilion, Ohio, on Lake Erie, fishing poles are available in the kids’ section. Libraries, write the Fallows, “have become the heart and soul of American communities.”

Leadership is basic to local renewal. In Columbus, Mississippi, last in the economic ranking of the fifty states, developer Joe Max Higgins was set on change. Write the Fallows: “Everything about his talk, walk, body language and comportment is go, go, go; do, do, do.” He has besieged businesses to locate in his non-union, low cost state, and they haven’t turned him down. Various factories now surround the regional airport, including Eurocopter that makes helicopters. Talk about changing the image of Mississippi! “That was really a big deal,” says Higgins. “People started walking upright.” Not quite what you read about in the state’s great novelist of the old South, William Faulkner.

Government, to be sure, is involved in the change. Public-private partnerships are key to many projects. In Greenville, South Carolina, civic leaders worked with state government to bring in American and international companies, including Michelin and BMW. Former Governor Carroll A. Campbell says the most important use of his time was to call businesses around the world to locate to his state. A series of mayors have turned a decrepit downtown into a sparkling new one with all the amenities. Ronald Loveridge, longtime mayor of Riverside, California, says, “I don’t know a successful city that doesn’t have a strong downtown.”

Immigrants, Hispanics in particular, are also a factor. They are available for the plentiful jobs, especially those that may be shunned by the local citizenry like the packinghouses in Dodge City, which provide a quarter of the beef consumed in the United States. In come live animals and out comes meat. What goes on inside tests the mettle of workers willing to put up with it. A packing house manager says to forget outmoded views. “The immigrants are the engine that keeps this community alive.”

So the Fallows conclude that America’s towns are now the places where you want to go rather than escape from. Condescension is out, admiration is in. On a local level, America works.