Eight U.S. journalists have been fired for a TV program critical of George Soros. Was it justified or a Stalinist hit?

Soros is a large, inviting target. No other American billionaire has put as much time and money into influencing politics both in the U.S. and abroad. He says it’s democracy building. His critics call it radically destructive. All too often allied with U.S. Government policy. As chronicled by Judicial Watch, a private analyst of government affairs, these activities formed the basis of a program on Miami-based TV Marti that inflamed an already red-hot topic.

The result was the removal of the program and the firing of eight staffers involved in it on the basis of “unethical, unprofessional journalism,” said the parent U.S. Agency for Global Media (USAGM). A Marti employee told the Miami Herald: “The environment that has been created by the upper hierarchy of USAGM is repressive. People write with fear. Adjectives are no longer used.” Just like Stalin, says Judicial Watch.

Even if the reaction was short of a shot in the cellar, it was still an overreach considering the state of journalism today. Unfettered attack is the norm. So why should Soros be spared? Somewhat complicating the matter, Marti called him a “non-believing Jewish financial speculator of flexible morals” who is also an “anti-Semite.” How’s that again? One of the world’s most prominent Jews whose activities are generally applauded by his community? Apparently, it’s based on his criticism of Israel and support of the Boycott, Divestment and Sanctions movement. He gets the same label as any other critic. 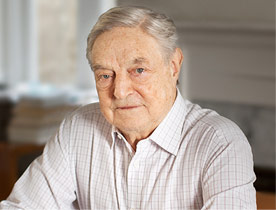 Soros raises a still larger question, and that is money in politics, lots of it. More than ever, thanks to a 2010 U.S. Supreme Court decision, Citizens United, that decreed money should be as free as speech in politics. A ceiling was removed for contributions to political campaigns as long as they’re not connected to the official campaign, which is easily avoided. The sky’s the limit still to be reached in the wild blue yonder, and American politics are transformed. Economic inequality is accompanied by political inequality.

In the voting booth, a George Soros, like his fellow Americans, has only one vote. But outside it in terms of influencing election outcomes he is the equivalent of many thousands of voters who in general contribute $200 or less per campaign. Who is likely to get more attention before and after an election? And more favorable legislation and more of a hearing on foreign policy decisions? Money, unfortunately, does not equal breadth of knowledge or service to the country. Soros, to be sure, is in the company of many other billionaires who can be found in support of both political parties.

Their supporters contend this is democracy in action. Others say it’s the very rich in charge, or plutocracy. In which do we live today?