Who’s the ideal man? How about John Wayne, hero of 83 Western films, who tamed the expanding West, stronger and taller than the next guy and faster on the draw, scourge of Indian and outlaw alike, winning or losing with a beguiling smile, protective of women and no womanizer. Who could ask for more?

Not me, writes Nancy Schoenberger in her book “Wayne and Ford” (director of Wayne’s films). A true fan, she says she couldn’t keep her eyes off him. It helped that he was like her adventurous father to whom she dedicates her book. And she believes he was more than just an actor. He embodied a masculinity that has been lost in an “era of gender fluidity.” Its characteristics: “to bear adversity in silence, to show courage in the face of fear, to bond with other men, to put honor and country before self.” 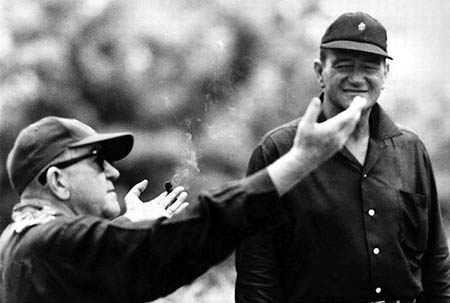 These are amply on view in films from “Stagecoach” to “Rio Grande” to “The Man Who Shot Liberty Valance,” a favorite of actor and director. To be sure, Schoenberger distinguishes between real life and film. In person, Wayne may not have been the hero of his movies, as he acknowledges: “I played the kind of man I’d like to have been,” His politics veered to the far right, and he supported the removal of Indians with whom he is often sympathetic in his films. But when facts and legend collide, writes the author, go with the legend. It served as a model for men who regularly went to see westerns, though they no longer do.

Creating this model was a lot of hard work, Wayne concedes. “When I started, I knew I was no actor, and I went to work on this Wayne thing. I figured I needed a gimmick, so I dreamed up the drawl, the squint and a way of moving meant to suggest that I wasn’t looking for trouble but would just as soon throw a bottle at your head as not. I even had to practice saying ain’t.” But such was the success of his creation that when he played a bad guy in “The Searchers,” considered by many to be his best film, viewers forgave him. Good or bad, Wayne was the real thing.

His films may not be to contemporary taste. There’s a certain stiffness and artificiality. Director John Ford says his first love was the awesome western landscape, and indeed the scenery in “Fort Apache” is more exciting than the plot. As for the Wayne model, it is not altogether gone. It survives, for example, in the stalwart ranchers on the Mexican border who must contend with well-armed gangs bringing drugs to America. There are no doubt other illustrations. So, Wayne lives, even if his films are gathering some dust. 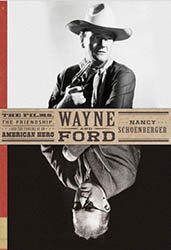 One thought on “The Real Man – John Wayne”