What organization on earth is the most dangerous to America yet rarely mentioned? Why, the unmentionable drug cartels.

In all the obsessive coverage of the border, blame is lavishly handed out to all and sundry – President Trump, the U.S. Congress, uncontrolled borders, Mexican and Central American politics, sinking economies, the stars in the heavens. But the real culprit remains in the shadows, which he prefers. A recent report by Mexican investigative journal Contralinea shows that eighty percent of the country is completely or largely controlled by the drug cartels, and that includes the entire border. Virtually nobody crosses without their approval. They control the crowds that gather and then disperse. At the same time, they keep sending their drugs across in the same enormous quantities to American consumers.

Yet is any of this in print or on TV? Try to find it. The Wall Street Journal has recently discovered violence as a cause of the Mexican migration. The reporter interviewed some women who said they want to escape to the United States because of all the murders and kidnappings in Mexico, which is one of the most dangerous places in the world. The journalist is to be congratulated for at least approaching the subject, but missing is any explanation for the violence – the fact that it’s the work of the drug cartels, their daily routine as they compete for routes and sales in the U.S. and, frankly, just kill for the fun of it. Nobody holds them to account. 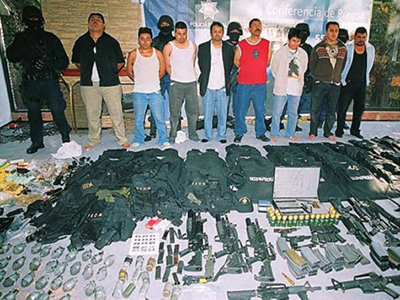 David Horowitz makes the point in The Conservative Review that while U.S. troops continue to attack the enemy in the 17-year Afghan war that is half a globe removed from American interests, the Border Patrol is not allowed to confront a greater menace closer to home — threatening cartel members just across the border. A camera recently caught five heavily armed men escorting a woman and her small son to the Arizona border. They were given asylum and her guards casually waved off. The cartel practice of immigration.

Mexico has become our colosseum. But unlike the Romans who watched the slaughter, we avert our eyes and enjoy the proceeds. That may explain our strange neglect. There’s money involved, billions and billions of it. Drug money along with drugs are encompassing our country. Let’s not ask embarrassing questions about where it comes from. The less we know the better, and the media keeps us uninformed. Silence is definitely golden.

Meanwhile, we concentrate on racism. Over and over we hear that attitudes must change and all will be well. Are the cartels listening? While living in Arizona for several years, I encountered little sign of racism on either side of the border but endless signs of violence. And yet we have the anomaly of two hosts on CNN stressing their moral superiority to a school teacher who has made slighting remarks about Mexicans while the media ignores the mass killings of Mexicans in Mexico.

Reality doesn’t fit the racism narrative. It’s time to get the story straight.