What could be nicer than a vacation in Mexico – sun, sea, beaches, no hurricanes and not too expensive. There’s only one problem – crime, lots of it, and increasingly American tourists are its victims. Lured by the promotion, they think five-star resorts with all the trimmings will be safe. Not so. There are dangers within, in particular tainted alcohol that can quickly lead to a blackout followed perhaps by robbery, sexual assault or drowning in a palatial pool.

The ads don’t mention it, but the resorts, like everything else in Mexico, are infested by the drug cartels. Concerned with profit, though nothing compared to drugs, they want Americans to have a good time and not be harmed. But violence occasionally erupts in the form of kidnapping, carjacking and murder. A total of 25,339 people were murdered in Mexico last year, a record number. Of these 129 were Americans – also a record. The U.S. State Department has issued a warning not to travel in five especially violent Mexican states, and U.S Government employees are forbidden from going there.

Veteran visitors advise women not to wear jewelry in Mexico, men not to display expensive watches. Even Nike tennis shoes invite attack. If there’s a danger of being swamped by giant waves on the beach of resorts, their pools are not much safer. Good swimmers sometimes perish in them under mysterious circumstances. At the Occidental Grand Xcaret resort in Playa del Carmen, eight-year-old Brent Midlock was swept inside a swimming pool drain pipe to his death. 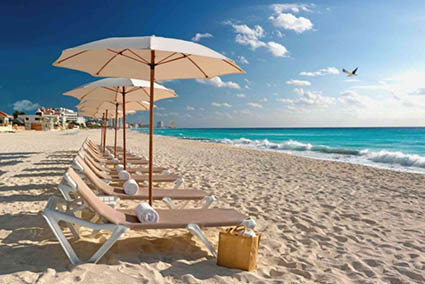 What to do? Call management? Gross negligence is not its concern. Summon the police? They’re under cartel management. According to Mexico Vacation Awareness Organization, Sara Ramirez Bonilla, 22, was abducted by security at the five-star Villas del Palmar in Cancun. When she resisted, her assailants broke her neck and threw her off a hotel balcony. Her boyfriend sought the police who thereupon kidnapped him and demanded $5,000 ransom, or he, too, would go off the balcony. The payment made, he was released with the warning he would be killed if he caused any further trouble since they had a copy of his passport and could find him. End of story.

It’s often fatal to be injured at a resort. While waiting for an elevator at the Hotel Royal Solaria in Cancun, Andrew Smith, 16, leaned on a wall that gave way and plunged five stories to the basement. It took an hour for a doctor, a pediatrician, to arrive who did very little. The hospital where Andrew was taken did less. He didn’t survive.

Even so, Americans are not deterred from vacationing in Mexico, which had almost 20 million visitors last year. There’s no reason why they can’t keep coming if they’re properly informed. But the American media has a hushed voice on Mexico. People are uninformed about what’s going on, learning more about far-flung places than neighboring Mexico. The cartels, in turn, have a long cross-border reach via drugs and drug money to stifle any questioning. Tourists need to ask some questions of their own while sipping their margaritas.

2 thoughts on “Vacation in Mexico”