As troubles pile up at home, President Trump acts more aggressively overseas, as we know from his tweets. That’s a mistake, say two researchers who have traced Trump’s surprise election victory to his anti-war stance that gave him three crucial states won by the Democrats in 2012:  Michigan, Wisconsin and Pennsylvania. 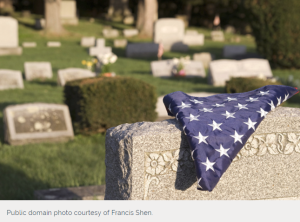 Douglas Kriner, professor of political science at Boston University, and Francis Shen, associate professor at the University of Michigan law school, have produced a report titled “Battlefield Casualties and Ballot Box Defeat: Did the Bush-Obama Wars Cost Clinton the White House?”* According to the research, they did. The professors combed through voting records county by county in the three states and found that Trump made gains in precisely those counties that had the highest rate of casualties in the various wars.

The report says these changes occurred in largely rural, not-so-well-off areas that political leaders and the media are inclined to miss since they have not been directly affected by war. Notes the report: “Perhaps the small slice of America that is fighting and dying for the nation’s security is tired of its political leaders ignoring this disproportionate burden. Increasingly, a divide is emerging between communities whose young people are dying to defend the country and those communities whose young people are not.”

Trump exceeded Mitt Romney’s vote in the last election and flipped the states to the Republicans. “Indeed, our results suggest that if the three states key to Trump’s victory had suffered even a moderately lower casualty rate, all three could have flipped from red to blue and sent Hillary Clinton to the White House.”

Thus, wars have their costs at home and abroad that are not always reckoned. The report concludes: “If Trump wants to maintain his connection to this part of his base, his foreign policy would do well to be highly sensitive to American combat casualties” and be more cautious in entering wars. In fact, ignoring his own advice, President Trump has continued the wars of his predecessors and added to them; for example, dropping more bombs on prostrate Yemen in a week than President Obama delivered in a year.

So, Mr. President, how about some anti-war tweets in keeping with your campaign?