Arizona Senator John McCain, who was tortured while imprisoned for five and a half years in North Vietnam, opposes that treatment of anyone else. So he and other U.S. Senators have called for an investigation into reports of U.S. military participation in torture in the war in Yemen. In reply, U.S. defense officials say there has been some American involvement in interrogation of Yemeni prisoners, but not torture. Earlier, McCain earned the ire of President Trump by questioning a U.S. commando raid in Yemen that killed a number of al-Qaeda operatives but at the expense of some civilian lives and one American, a Navy Seal. 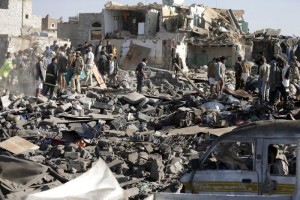 There are still graver questions about the war in Yemen. It is basically a civil war in which the U.S. and Saudi Arabia have chosen sides. With some U.S. weaponry and intelligence, the Saudis have pulverized a small, poor nation on the tip of the Arabian peninsula. Not too skilled at bombing, they have struck hospitals, schools, markets and even a funeral ceremony. Some 10 thousand people have been killed with three million driven from their homes. Famine is approaching, and an outbreak of cholera has added to the misery.

The reason for the war? Geopolitical, it would seem. The enemy Houthis have ties to Iran, which is presumed to seek hegemony in the Middle East. A future possibility, but not exactly a suitable rallying cry for war at the present time. The same could be said of other wars in which the U.S. is involved in the Middle East and Africa. Definitely, wars of choice.

The question is how much are they in the American national interest? Certainly, terrorism must be countered wherever it springs up. But this may or may not entail a full scale war. Fortunately, however destructive and demoralizing, terrorist acts are sporadic, while the U.S. is enduring an every-day invasion from south of the border that gets nowhere near the attention it deserves. The onslaught of drugs and drug money is truly poisonous to the country with gang violence in various American cities a replica of the murderous cartel competition in Mexico.

Perhaps some of the trillion dollars invested in wars half a globe away could be brought back home to strengthen the Mexican border with appropriate manpower, trace the drug money corrupting elements of the U.S. and help the millions addicted, many of whom are trying to relieve the pain, physical and mental, from an economy of inequality that hasn’t worked for them. Being jobless and desperate is a path to drugs. Let’s win this war.

One thought on “Which War To Fight?”