In the frenzy of the Presidential campaign, Hillary Clinton singled out a Democratic candidate for a special attack:

“She’s the favorite of the Russians. I’m not making any predictions, but I think they’re grooming her to be the third party candidate.” With the vote split, that would likely throw the election to Republican Donald Trump.

Congresswoman Tulsi Gabbard was not mentioned by name, but she was the obvious target since she has urged better relations with Russia and questioned all the U.S. post-9/11 wars, open and covert, that lack a clear purpose. The result:  some five million fatalities and a flood of refugees.

A veteran of the Iraq war, she responded briskly:

“Thank you, Hillary. You, the queen of warmongers, embodiment of corruption and personification of the rot that has sickened the Democratic Party for so long, have finally come out from behind the curtain.” 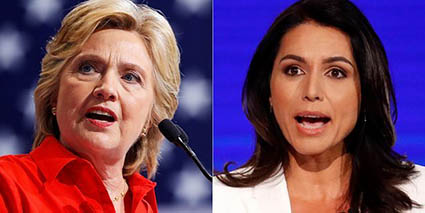 She invited Hillary to join the Presidential race where the two can compete for the top job, something of an exaggeration since she has limited support among Democratic voters. But her attack deserves an answer. No one favored military action more than Hillary in the Obama Administration. As secretary of state, she was an eager participant in the overthrow of Libyan leader Muammar Gaddafi, whose gruesome murder elicited a misquote from Julius Caesar, who did know how to win wars. “We came, we saw, he died,” she proclaimed. Libya has been a shambles ever since.

Despite wildly enthusiastic support at his rallies, President Trump is not necessarily a shoo-in for reelection. He could be challenged by a strong Democratic candidate stressing, say, the enormous inequality in America that lets big money decide elections and policies. But the current Democratic lineup doesn’t seem up to the job, leading to speculation that Hillary might jump in and possibly get the nomination. In a dramatic rematch with arch-rival Trump, the issue of war could hardly be avoided.