How much U.S. intervention overseas is too much? The results to date are not encouraging with more chaos in Iraq, Syria, Libya and Afghanistan in the aftermath of U.S. military involvement. Now the attack on Saudi oil facilities in the bitter four-year war with Yemen threatens to embroil the U.S. in yet another questionable intervention. 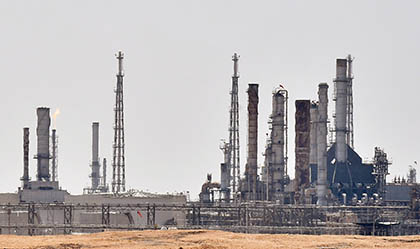 Actually, it has been building for some time. Military aid to the Saudi war – weapons and intelligence – began under President Obama and has been continued by President Trump. This has contributed substantially to an unequal conflict that has led to massive civilian casualties, disease and famine in smaller, neighboring Yemen, what’s described as a humanitarian catastrophe. The U.S. claims it’s aiding Saudi Arabia because Iran is backing the Houthis who are doing the fighting in Yemen. It holds Iran responsible for the attack on the oil fields and has imposed still more sanctions. The Houthis respond that they directed the attack. The way to solve the crisis, they contend, is to end the war.

The Trump administration has been at odds with the U.S. Congress on the issue. In April it took the unusual step of voting to suspend military aid for the Saudi war. But Trump, though claiming he wants to get out of all unnecessary wars, vetoed the measure. His action suggests the power of money in politics these days. One of his largest donors, billionaire Sheldon Adelson, is hostile to Iran and urged Trump to scrap the Iranian nuclear deal, which he did. Like Presidents before him and no doubt after, he is up against the combined power of the military, industrial and Israeli lobbies who want to continue wars even if they don’t seem to be going anywhere.

But Trump compounds his problem by his own appointments, almost all hard-line neoconservatives who insist on war with Iran. He fired one, John Bolton, but others remain and actively pursue their agenda within the White House. There are alternative advisers, competent strategic thinkers, outside the Washington consensus. But Trump may be unaware of them because they don’t appear in the mainstream media where he gets his information even while attacking it. Serious dissenting views are seldom heard like those of U.S. Representative Tulsi Gabbard, the only Democratic candidate for President who questions the accumulating wars.

There was a time when the U.S. proved capable of a winning strategy in a period of far greater danger than exists today. During the half century of Cold War, mistakes were made like the Vietnam War, but a succession of skilled planners managed the crises as they occurred, combining strength with restraint in a so-called containment policy that waited out the Soviet Union until it collapsed. Despite all the warnings of a Third World War, a general peace was preserved. That shows it can be done, and the U.S. did it. With the proper people and policies it can be done again.