As dawn approaches, a group of inmates at an Arizona state prison in the town of Florence head for the horses – not to escape on them but to care for them before they are sent on to the Border Patrol. It’s a program of rehabilitation. By handling the horses, it’s reasoned, the prisoners will better handle themselves when it comes time for their release. The prisoners seem to have caught on. Brian Tierce, imprisoned for assault, told Reuters the horses have taught him “patience, perseverance, kindness and understanding.”

That is one use for the growing number of excess wild horses now roaming the prairies of the West. The U.S. Government, notably the Bureau of Land Management, doesn’t know what to do with them. On 27 million acres of federal land, there are some 72,000 horses, almost 50 thousand too many to survive. They have grazed the grassland to dust, and many are starving. Their predators, wolves and mountain lions that kept their numbers down, have largely vanished. The number of these extremely fertile horses is expected to double in the next four years.

In the past, the BLM relied on adoption, but that has fallen off.  It’s also expensive – $49 million a year to ranchers and others willing to keep the horses. Robert Hughes, a cattle rancher in Oklahoma, maintains over four thousand horses on thousands of acres of prime grassland. He told the New York Times: “I basically run an old folks home for horses.” 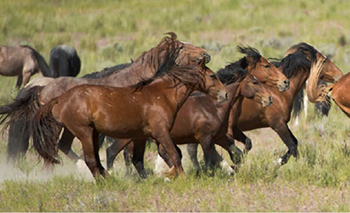 Other uses for the horses are even more problematic. The drug Premarin, effective for menopausal women, is made from the urine of thousands of mares impregnated each year for that purpose. They are confined to tight stalls where they can hardly move and are encumbered with urine collecting bags. When they can no longer perform, they are sent to a slaughterhouse for horse meat, thought to be a delicacy in many parts of the world.

Chris Stewart, a Republican congressman from Utah, says he is second to none in his love of this iconic wanderer of the West. But he believes the opposition to humane euthanasia is misplaced. Better that than what we have today. The legislation exists to euthanize even healthy horses. He has proposed to reactivate it, given approval by the House of Representatives. Considering the problem, he says, there is no other choice.